National Observer: "Canada has increased its emissions in each of the last five years. In fact our climate pollution has gotten so bad that we no longer bother talking about our upcoming 2020 international climate commitment. Remember that? The U.S. is pushing to meet their identical 2020 commitment. Europe already has. But in Canada we gave up trying long ago.

Our previous Prime Minister, Stephen Harper, promised he had a plan to meet our 2020 climate commitment. But his under-weight climate policies got wiped out by his higher-priority push to keep expanding Canada's carbon-extraction industries.

Now our new Prime Minister is following the same pattern."
at 3:52 AM No comments:

Saskatoon StarPhoenix: "City of Saskatoon staff intend to look at the idea as a way to get more people used to taking the bus. The proposal came from Saskatoon astronomer Stan Shadick in a letter to city hall that was reviewed at Monday’s meeting of city council’s transportation committee.

“Buses seem to run mainly empty at these times,” Shadick wrote. The transit lobby group Bus Riders of Saskatoon sent a representative, Cameron McMillan, to voice support for the idea. Coun. Darren Hill asked McMillan whether he was aware of any municipalities that have gone down this route, but McMillan said no.

“I’m all about creating new riders and new rider groups,” Hill said. The committee voted to pass the suggestion on to city hall staff for a look."
at 9:42 AM No comments:

Saskatchewan oil spill - much more than just money lost, but #freetransit "too expensive"

CBC News: "The city of Prince Albert, Sask., activated its emergency operations centre on Saturday afternoon to put together a contingency plan after noting that a boom set up to contain an oil spill upstream on the North Saskatchewan River had been breached.

A pipeline break, reported by Husky Energy on Thursday, resulted in an estimated 200,000 to 250,000 litres of oil reaching the North Saskatchewan, entering the water near Maidstone, Sask.

Booms had been initially setup in that area to try to contain the spill."
at 12:22 PM No comments:

MTL Blog: "But if that’s the case, then why not just bite the bullet and make public transport free all the time? Think about how many cars would be left at home.

Plus, this could ONLY work if it were a year round plan. Because no one in their right mind is going to wake up in the morning and check for smog alerts to find out whether they should be taking the bus or their car to work. People just don’t operate that way, we are creatures of habit."
at 5:56 PM No comments:

Public transit should be free

The Coast: "Just like public health care and public schools, I believe that free transit is a public good because we would live in a better world if everyone was healthy, educated and able to get around.

We collectively fund public health care because we see it as an important public good, but we fail to provide the means for low-income people to be able to afford to take the bus to the doctor. Many minimum-wage workers scrape together $78 every month to be able to afford to take transit to work. Meanwhile, most income assistance recipients looking to re-enter the workforce are denied funding for transit to get out and find a job or go back to school.

I believe that, as a society, it is our collective responsibility to provide people with the means to realize their full potential. So that’s why I think it’s time for our city to step up to the plate and provide free transit for all residents of Halifax.

In fact, we already have free transit. The recent implementation of the Halifax Harbour bridge shuttle, in response to the Macdonald Bridge closures, has been providing free transit across the harbour for thousands of pedestrians and cyclists. Seniors ride for free on Tuesdays, university students ride for a reduced rate throughout the school year with a U-pass, and everyone rode for free in March 2012 after the Halifax transit strike.

What’s more, the city of Halifax can afford to provide free public transit. Eliminating bus fares from all transit would only cost $35 million dollars, or just three percent of the total operating budget. This amount pales in comparison to the $55-million price tag that the city has already committed to the new convention centre.

Put in this light, the question of free public transit becomes not about finances, but about political will. Do we fund development that lines the pockets of big developers, or we do promote economic policies that puts money directly back in the hands of working people?

Free transit is a form of economic stimulus because it puts money directly back into the local economy. Low-income and working people have unmet financial needs, and that $78 a month which would have otherwise been spent on transit will instead be spent on food, rent, utilities and other basic necessities of life.

Imagine how great it would be if the ferry was free. Free public transit across the harbour would mean that more summertime tourists would visit downtown Dartmouth, and that suburban commuters would have free and environmentally sustainable transportation to work every day. Free transit would mean that unemployed people will be able to go out and look for work and that people with disabilities will be able to more actively take part in social and economic life.

The Canadians cities of St. Joseph-du-Lac, Winnipeg and Calgary all already have some form of free transit, and Moncton is currently looking at implementing a similar policy. Now it’s our turn.

Windsor Star : "Transit Windsor is increasing fares for the first time in more than two years, but even a small hike will sting those who use the service the most — seniors and students."

Costs go up, so fares must go up. Translation... we are spending millions on automobile infrastructure, but you people insist on using buses. We fix that. We will raise fares.
at 12:30 AM No comments:

When you calculate net-energy/EROEI, is this included?

Decades after pipeline spill, contamination could remain: "Despite Canadian oil transport giant Enbridge's assertions that it had cleaned up all but one of the five barrels of oil they said leaked from a pipeline in the Hiawatha National Forest in the Upper Peninsula around 1980, contaminated soil and groundwater persisted at the site for more than three decades."
at 5:47 PM No comments:

Prime Minister Justin Trudeau is in Montreal this morning 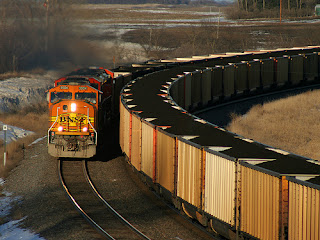 CleanTechnica : "The CEO of Canadian Pacific Railway, one of the largest railways on the continent, was recently quoted as saying that people need to begin realizing and accepting that fossil fuels are “probably dead” — owing to a changing climate and the environmental hurdles that are likely to be introduced in coming years to large-scale use of fossil fuels."
at 3:45 PM No comments: